Author, Architect, Painter, Poetess
Mrs. Mahmehr Golestaneh (Vahdat) was born in 1935 in Tehran to a Bahá’í family. She left her studies at Tehran Law School unfinished due to marriage and family formation. She moved to Masjed Soleiman in Khuzestan with her husband, an employee of the Iran Oil Company. In 1962, with two children, she moved to London with her husband and family. From the age of ten, she studied drawing and painting with Professor Reza Samimi for seven years, because of her love for painting and poetry since she was a child. She attended the College of Decorative Arts in London. After five years, she received her diploma, first rank, in the field of wall and building decorations successfully. Her dissertation was on the impact of the Mongol and Timurid invasions on Iranian art. She returned to Iran in 1966. Her artistic activity began with designing two giant walls of ceramics, mosaics, and glass for Tehran's Rudaki Hall. She continued until the decoration and completion of ten banks, two large hotels, the Ministry of Agriculture, hospitals, and many homes and public buildings. She taught at the College of Dramatic Arts in Tehran for ten years in perspective "landscape and stage design." She was selected as the top decorative and construction consulting engineer by the Management and Planning Organization of Iran. Her advancement and promotion period subsided with the change of regime. The beginning of the new government's violence due to her belief in the Bahá’í Faith caused her to leave her homeland. In 1979 she entered the United States unintentionally and with a broken heart. She did not rest in exile and magnificently organized eighty individual and group painting exhibitions (watercolor, enamel, copper, ceramic tiles) in different parts of Asia, Europe, and America.
Along with painting, Mrs. Golestaneh loves poetry, writing, and history. Many of her articles have been published in Iranian and foreign journals. Her talks about Iranian art and the recent Bahá’í martyrs of Iran after the revolution have been broadcast on various radio and television stations.
She has succeeded in publishing several books as follows:
• Parvazha va yadegarha (Flights and Memories) about 215 Bahá’í martyrs after the Islamic Revolution
• Simorghan-i Boland Ashianeh (Phoenixes of Higher Grounds) about prisons in Tehran and Qazvin during the Qajar period
• In Memory of Jhinous and Houshang Mahmoudi
• Memoirs, a selection of her poems and paintings during sixty-five years
• Shidrokh, the biography of a Bahá’í martyr
• The Eghrari and Misaghian Families
• My Life, which was not published
• Setaregan-i Kaveer (Stars of the desert)
Mrs. Golestaneh and her late husband, Dr. Ali Golestaneh, have four daughters who have graduated and started families, and now she has five grandchildren and four great-grandchildren.
Read about her new book 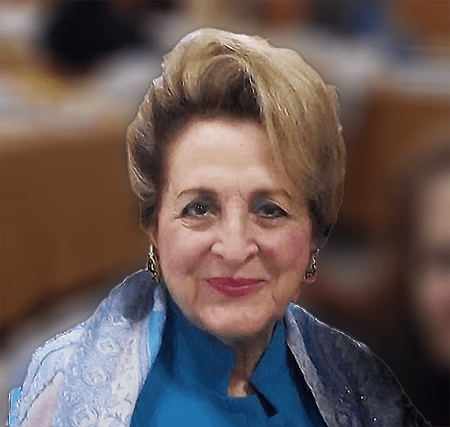